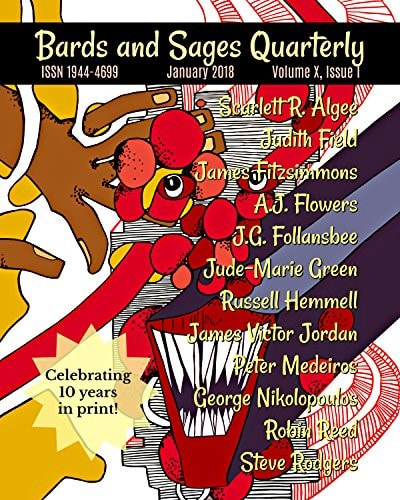 At the moment, I have so many personal writing tidbits to impart that I get brain paroxyisms if I even glimpse the word “book” from my peripheral vision. So, in true procrastinatory style, I’m going to delay all the immediate exciting stuff, and talk about something that happened early January. And in the process, I’ll give you my wholly unsolicited opinions on humorous writing, because clearly there’s nothing more important going on in the world. I’ll have more on my crazy-happy nipple-stiffening funtime news in a later blog.

In January, the on-line magazine “Bards and Sages” published my short story “Blood Soap”, which grew out of a writing-prompt-driven exercise at my Viable Paradise XVIII writing workshop (for any VPers reading this, this was my Thursday story). This was intended to be a humorous story, and since no one likes people who think they’re funny, I’ll just say that the editors did laugh, and leave it at that. I do regard this one as less intentionally humorous than some of my other stories, as the joke remains dormant until you get deep into the meat of the tale. But it still qualifies as an intentionally funny (on my part) blurble.

So what makes a story funny? And who the hell am I anyway to expound on that? Well the first question is the subject of this blog post, so let’s not get ahead of ourselves. The answer to the second question, is: no one. But, I have sold every single story that I intended to be humorous, and this represents a far better track record than my other shorts. I count 5 “intended to be funny” stories that I’ve written in my lifetime, 100% of which have sold—including my story “Hoppers” the only one that was sold to two different venues.  My other non-funny stories have a much less stellar history, which shall remain unquantified in order to salvage some shred of my pride. So, you’d think I’d write nothing but funny stories—yet that gets old, and sometimes you need a little salt on the rice. But the point is that funny can sell if you do it right, and while I am less than a flea embedded in the crud on the boot of Terry Pratchett, I do have some opinions borne of real-world experience.

So what makes a story funny? In my opinion, it comes down to one or more of these 4 things:

OK at the risk of exposing myself unnecessarily, I’ve included a moderately-intentionally humorous snippet from Hoppers, where you can see some of the above elements at play.

I walked into his office and immediately took one giant step backwards. The smell of hair gel, deodorant, body lotion, and pipe smoke assaulted me like a squad of robo-marines, swirling into a toxic gas cloud which had probably killed any unfortunate insect that’d crawled into that office.

Sir Jun seemed unaware of my discomfort. “Sally forth, man, we haven’t got all day.” I took two reluctant steps forward, trying to plaster a smile on my face.

“These killings are a stain on the entire Endomis sector, and must not be allowed to stand,” Sir Jun bellowed from behind his pipe, blowing clouds of smoke everywhere. “Lim, I want you to take charge of the investigation.”

Yes, he’d called me Lim. You should realize at this point that Sir Jun is quite mad. He dresses himself like the worst caricature of a British colonial officer, with a giant handlebar mustache, safari shorts, and knee high socks. He’ll also don the occasional pith helmet, just in case you haven’t glommed onto the fact that he’s from the gray isles. And in the six years we’ve worked together, he’s never once pronounced my mono-syllabic name correctly.

That’s OK, I get my revenge through endless horrible puns on his title, made mildly amusing by his utter cluelessness.

“Well, speak up, Lend. Are you man enough to take this one on?”

I’m sure my eyes sparkled. “Absolutely. We’ll cut to the truth with a fine-edged scalpel, Sir Jun.”

“Boffo! There’s the spirit, old boy.” He slapped me on the shoulder. “We need more of that courage in this desolate abode.”

“First I’ll get the pulse of this problem, Sir Jun. Then I’ll put on my face mask and get to work.”

Sir Jun gave only the briefest look of confusion before nodding vigorously. “Precisely so. These cheeky killers will stop at nothing, but we’ll prove we can follow them anywhere in the multi-verse. Our bobbies will chase those skullduggers right through to the next thread.”

“Hear hear,” I shouted, slapping the door jamb. “We’ll slice deep and extract the tumor that–wait, what?” I straightened. Even Sir Jun couldn’t be that crazy. “Uh, they’ve hopped out already?”

“Quite. Personnel at the Endomis hopper station believe our ne’er-do-wells scooted to the next thread before the bolo could work its way through the facial recognition machinery.”

I shook my head and went to open a window. “Sir Jun, if they’ve hopped out, they’re gone. Kaput. Out of our reach. Un-followable. I don’t see how I could even start the investigation.” I breathed deeply as the dusty Cenaris air slowly diffused the deodorant and pipe smoke.

Sir Jun squinted. “It’s really quite elementary, Lawn. You simply find their analogs and wait for them to commit the crime.”


Now I don’t view any of this as laugh-out-loud funny, but it has a general style that shows some of the points above. First of all, Sir Jun is clueless about his madness, and in the style of many boors, is completely unaware he’s being made fun of. He continually calls Len by the wrong name, to which Len’s coping mechanism is to transpose Sir Jun and Surgeon. Sir Jun is also mad, and doesn’t understand what he’s asking (this is fleshed out more in subsequent paragraphs I didn’t include). The dialog has a certain cadence—Sir Jun makes a pronouncement, followed by Len’s joke—this goes on for a few paragraphs, where everything is interrupted by the fact that what Sir Jun is asking is impossible, and then the style of dialog changes.

Ok that was my lame attempt to give an example of the precepts above. Like I said, whether you think the above is funny or not is entirely subjective, but it illustrates some of what I was trying to say above (this story was sold to two separate semi-pro zines).

That’s it for this time. Next time I hope to share some of the writing news that’s been threatening to burst through my seams. Later…